Главная / Без рубрики / Russian Foreign Ministry: “The termination of the Treaty of friendship with Turkey is not possible”

Russian Foreign Ministry: “The termination of the Treaty of friendship with Turkey is not possible” 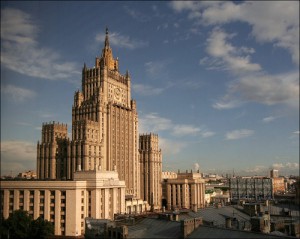 The Russian Ministry of Foreign Affairs considers impossible to denunciate the Russian-Turkish Treaty of Friendship and Brotherhood from March 16, 1921.

In support of its position, the Russian Foreign Ministry explains that in the international practice peace treaties, establishing borders between states, are not subject to denunciation.

«With this in mind, from the legal point of view, the termination of the Treaty, which determines the line of the Turkish state border with Georgia, Armenia and Azerbaijan, as well as the status of certain territories of these states, is in conflict with these principles (the principles of international practice – ed.),” declares the Foreign Ministry announcement.

In addition, the Russian Foreign Ministry believes that “the provisions of the Treaty can not be applied in the relations between Russia and Turkey because of the significant geopolitical changes in the region occurred after 1921.”

The Russian Foreign Ministry also reminds that the termination of the Treaty will not bring to any real change, but on the contrary, will have a destabilizing political influence of the unstable situation in the South Caucasus region which is in close proximity to the Russian borders.

At the beginning of February 2016, State Duma deputies, secretary of the Communist Party Sergey Obukhov, Deputy Chairman of the Central Committee of the Communist Party Valery Rashkin appealed to President Vladimir Putin and Foreign Minister Sergey Lavrov with a proposal to denounce the Moscow Treaty of friendship and brotherhood, concluded by the Government of the Russian Soviet Federative Socialist Republic (RSFSR) and the Turkish authorities on March 16, 1921.