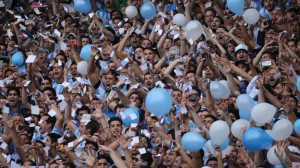 The Argentinean football club «Racing» has abandoned the sponsorship deal with the Turkish Airlines after long negotiations. The club reports that the reason for the refusal is the Armenian Genocide of 1915 conducted by the Ottoman Empire and the denial of the historical fact by Modern Turkey. The Youth Union of Armenians of South America has thanked the club for this step. A letter is published on the official website of the football club. «Football jerseys and club colors should be spotless. They identify the club for the fans. For this reason, no fan in the world wants to have a team sponsored by a government that violates human rights,»- said Alfonso Tabakian, Head of the Armenian National Committee of South America.