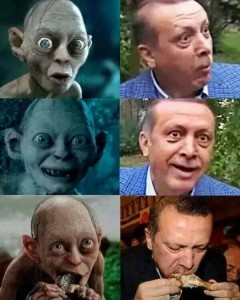 Well-known rock musician, front singer of «System of a down» Serj Tankian commented on the criminal case against Turkish therapist Bilgin Ciftci, who had offered to find the similarities between Turkish President Recep Tayyip Erdogan and one of the heroes of the film «Lord of the Rings”, Gollum. The corresponding photos he posted on his Facebook page.

«… I am sure that Peter Jackson (the creator of the trilogy» The Lord of the Rings-ed.) as an expert will confirm that Erdogan’s comparison to Gollum is hurting the image of the latter.» Note: The Turkish court demands an appropriate examination to determine whether or not the comparison of Erdogan to Gollum is offending.