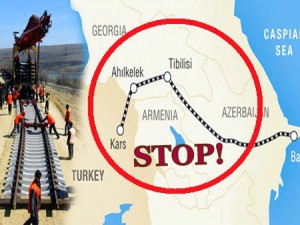 The opening of PPC Karzakh, directly connecting Georgia with Turkey, has caused anxieties in the Armenian-populated Javakhk. The hijacking of 34 ex-head of cattle and an attempt of trafficking of underage persons are the two cases related to the new checkpoint.

On the morning of September 13, the village of Karzakh, Samtskhe-Javakheti region of Georgia (the vast majority of the population is Armenian – ed.), reported for the stealing of 34 head of cattle: the evidences led to the Georgian-Turkish border. The headman of the village of Karzakh, Atom Okhmrtsyan confirmed that the cattle belonged to him and said that he had discovered the loss at about 06:30 am. The Border Guard Service of Georgia is currently engaged in the case. At the request of the villagers of Karzakh, the construction of the Baku-Tbilisi-Kars railway, staffed mainly by Azerbaijanis, is urgently suspended. The villagers say they won’t allow restarting of the construction works as long as the case of the theft is not disclosed.

The theft of livestock from Karzakh is not the first case, recorded after the opening of customs crossing point. Recently, a case of cattle theft was registered in the border village of Sulda.