On the night of August 17, at about 2:50, near the city of Armavir in the Krasnodar region took place an accident, in which two people were killed, 12 — injured.

According to the Chief Department of the RF Interior Ministry in the Krasnodar region, the 50-year-old driver of the minibus «Mercedes Sprinter» with the state numbers 34 TL 778, following the route «Yerevan-Anapa» lost control and ran off the road. As a result, the bus crashed into a tree and capsized. In the vehicle were 20 people, of which 19 Armenian citizens, 1 — citizen of Georgia.

The second driver of the van — 37-year-old Armen Ghukasyan died on the spot. Later was received the information that on the way to the hospital had died a passenger of the van. The Bureau of Forensic Medicine of Armavir has informed the RUSARMINFO correspondent that the second victim of the accident is Rita Hovhannisyan (born in 1962). «The causes of death of Armenian citizens taken to us, have not been determined yet,» informs the morgue.

The two citizens injured in the road accident are being transferred for treatment to the regional clinical hospital Ochapovsky. This has been reported to RUSARMINFO in the 3rd city hospital of Armavir. «Svetlana Balygina (born in 1975) with the closed comminuted fracture of the neck and shoulder, and a man with the surname Beguchyan (name is unknown) are being transferred to Krasnodar. The patients will be taken to the regional clinic by two modern ambulances, accompanied by qualified professionals,» it has been explained in the hospital. 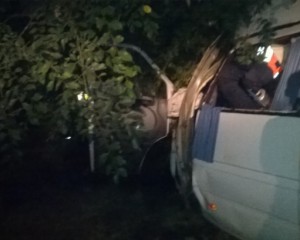 Currently, the 10 people injured in the road accident are receiving treatment at the 3rd city hospital of Armavir. They are in the trauma, neurosurgical and surgical wards. Most of them have closed comminuted fractures, bruised soft tissue wounds. One patient has a concussion. The list of patients of the 3rd city hospital of Armavir is the following: Khudoyan Gyulizar, Broyan Ester (born in 1997), Harutyunyan Artsrun (from Etchmiadzin, born in 1994), Khachatryan Hrach (born in 1960), Bagudyan (name is not installed) and Pogosyan (male, personal information is not specified), Ghukasyan Christine, Pogosyan Vazgen (from Etchmiadzin, born in 1963). The identity of another patient is not yet proved.