Take a photo with Kim Kardashian and become the U.S. president

Kim Kardashian continues to actively support the presidential candidate Hillary Rodham Clinton. This time, Kardashian made a selfie together with Hillary. 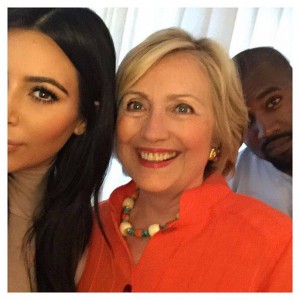 A day before Kim Kardashian accompanied by her husband Kanye West and her mother Kris Jenner attended the event in Los Angeles, where Hillary Clinton was to perform. Before the meeting, Kim wrote in Twitter: «Anxious. Maybe she’ll take a selfie with me?»

All the 34 million subscribers later learned that Kardashian had succeeded to take a selfie with Hillary Clinton.

Earlier RUSARMINFO wrote that Kim Kardashian has been supporting Hillary Clinton to become the first woman president of the United States, hoping for her victory. Recall that in 2008 Hillary Clinton already participated in the presidential campaign. She was the main rival of Barack Obama inside the party. The U.S. presidential election will be held on November 8, 2016.