Главная / Без рубрики / Vladimir Yevseyev: «The overthrow of Assad is fraught with the first genocide of the XXI century»

Vladimir Yevseyev: «The overthrow of Assad is fraught with the first genocide of the XXI century» 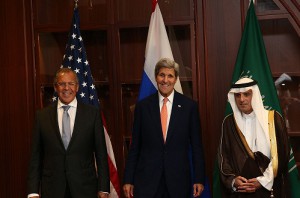 A day before in Qatar, Russian Foreign Minister Sergey Lavrov, U.S. Secretary of State John Kerry and Foreign Minister of Saudi Arabia Adel Al-Dzhubeyr discussed ways to step up the fight against terrorists from the «Islamic State». During the talks, Lavrov presented to his colleagues the details of the plan of Vladimir Putin to neutralize the Islamists. The plan is to build a broad coalition with the participation of the Syrian and Iraqi armies, Kurds, as well as the countries in the region.

The new format of struggle against the IS proposed by Sergey Lavrov in the interview to RUSARMINFO analyzed Vladimir Yevseyev, the director of the Center for Civil and Political Researches.

The expert believes that the project will succeed only if the United States withdraw from the agenda the ouster of Syrian President Bashar al-Assad. «In view of the fact that Barack Obama has been very pleased with the fact that Russia helped the United States to resolve the issue with Iran, it will be reasonable if the United States cease to destabilize Syria. In principle, the coalition is possible, as now a difficult situation has occurred in Turkey — the U.S. ally. The events have acquired internal political character, the Kurdish problem has aggravated.» Yevseyev believes that in such a situation, the United States should adjust their policy on Syria not to repeat the Libyan scenario. «If somehow the power of Bashar al-Assad in Damascus is overthrown, in Syria the Libyan scenario will be repeated in its worst manifestation: all the religious minorities will be subjected to the physical destruction. In the context of radicals’ takeover, there will be a genocide of the peoples living in Syria, following the example of the Armenian Genocide in the Western Armenia in the early XXth century. »

Vladimir Yevseyev assures that if the United States reconsider their position, a further step will be the imposition of the U.S. pressure on Turkey to limit the financial support of the IS. And if the current support remains, it will be extremely difficult to win the IS. But in parallel, besides the U.S., it is important to engage in dialogue with other countries, such as Qatar and Saudi Arabia, which, in fact, are the sponsors of terrorism in the face of radical Islamists.