Главная / Без рубрики / A compromise impasse: Baku does not recognize, and Yerevan will not yield

A compromise impasse: Baku does not recognize, and Yerevan will not yield

Russian Foreign Minister Sergey Lavrov, after the visit of the US co-chair of OSCE Minsk Group James Warlick to Moscow on July 14, said that the time had come, when in the settlement of the Karabakh conflict could be fixed a quite serious progress. It’s noteworthy that the U.S. mediator in Moscow and subsequently in Yerevan several times repeated that the adjacent to Nagorno-Karabakh 7 regions should be returned to Azerbaijan, and the U.S. representative stressed that «it is possible only in case of serious security guarantees for Nagorno- Karabakh.» 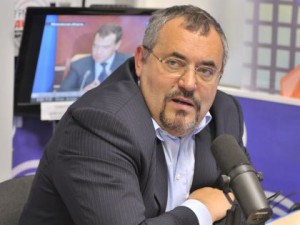 In a telephone conversation with RUSARMINFO President of the Institute of Regional Projects and Legislation Boris Nadezhdin has suggested that the near resolution of the Nagorno-Karabakh conflict is unlikely, because there is no answer to the question «whether Azerbaijan is ready to recognize the independence of Nagorno-Karabakh». «I hardly imagine the President of Azerbaijan recognizing Karabakh as part of Armenia, or recognizing the independence of Nagorno-Karabakh, in the same way none of the Armenian Presidents will handle the territory to Azerbaijan.» At the request of the RUSARMINFO correspondent Boris Nadezhdin also commented on the statement of the Russian political analyst Sergey Markov, supporting the Washington’s idea in regards to the transfer to Azerbaijan of the adjacent to Nagorno-Karabakh seven regions, forming the security zone of the Nagorno-Karabakh Republic.

«I do not know what guided Sergey Markov, when he spoke about the expediency of transferring the seven districts adjacent to Nagorno-Karabakh. Sergey Markov is not an official representative of the Russian Federation, and his opinion is not the official position of Russia on this issue.» In an interview with RUSARMINFO, the chief editor of «National Defense» magazine Igor Korotchenko also has suggested that the solution to the Nagorno-Karabakh conflict is out of question in the nearest future, and the feasibility of the transfer of territories does not guarantee a speedy solution to the problem. «The problem can be solved only through the decades, in a short time can only be a war that, in my opinion, need neither Armenia, nor Nagorno-Karabakh and Azerbaijan. A fragile peace is better than a war,» says the expert. Korotchenko is also confident that in relation to the resumption of hostilities, Azerbaijan restrains, primarily, realistic assessment of the situation: Baku knows that by military means the problem won’t be solved. Recall that the negotiation process on the Nagorno-Karabakh conflict began in 1991. In 1992, the Minsk Group was established under the auspices of the Organization for Security and Cooperation in Europe (OSCE) to resolve the Karabakh conflict, co-chaired by the U.S., Russia and France.