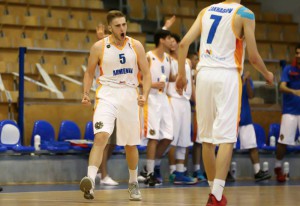 The Armenian Youth Team has completed its performance in the Division «B» of the European Championship of Basketball, and it’s rated among the 30 best teams in Europe.

«Given the fact that our team was participating in the European Championship in the age category up to 20 years for the first time ever, the results of the command can be qualified as positive. On the first attempt, our team surpassed countries such as Switzerland, Romania, Austria. I think, there’s no need to repeat once again, how difficult it is to achieve success in team sports. There should be a long and hard work, because there is a very fierce competition,» said the President of the Basketball Federation of Armenia Hrachya Rostomyan.

The matches in the Division «B» of the European Championship were held in Hungary from July 9 — 19. In the first round, the team from Armenia won a victory over the Swiss national team with a score of 71:57, the second and third games were lost to the teams of Macedonia and Belarus, and in the fourth stage, the basketball players from Armenia with the score 81:55 won the team from Moldova. The participation of the Armenian team was led by the Russian expert Victor Uskov.

The idea of ​​forming a youth team belongs to the vice-president of the Basketball Federation of Armenia Ara Poghosyan. The purpose of the project is to find talented young basketball players of Armenian descent all over the world, assist them in obtaining Armenian citizenship and involving in the national team for the further participation in international competitions under the Armenian flag. The Youth Basketball National Team of Armenia has participated in several international tournaments: the International Tournament (unofficial World Championship) of Basketball players up to 15 years old, the European Basketball Championship for players under 20 years old. The team is also planning to participate in the European Championship for the players under 18 years old.