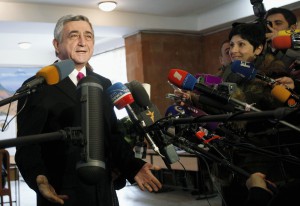 Recently, Armenian President Serzh Sargsyan has held a meeting with the representatives of the Armenian political parties of RPA, «Dashnaktsutyun», «Prosperous Armenia», «Rule of Law», «Free Democrats», «Armenian National Movement», «Christian-Democratic Party», «Constitutional Right Union» and “National Unity» to discuss the process of constitutional reforms. According to the Radio «Liberty», during the meeting no party opposed to the constitutional reforms, according to which the republic should move from a presidential to a parliamentary form of government. The political opponents of President Serzh Sargsyan argue that the constitutional reforms are initiated by him in order to maintain his power after the presidential term. At the same time, Sargsyan has repeatedly and publicly stated that he does not intend to take any future prime minister or president term to remain in office. However, his opponents believe that the current Armenian President, as the head of the incumbent Republican Party of Armenia (RPA) since 1999, is planning to take the post of the Parliament Speaker — the country’s leader. Professor Alexander Gusev, Head of the Centre of Strategic Development of the CIS countries, the Institute of Europe, Russian Academy of Sciences, believes that the transition from a presidential to a parliamentary form of g 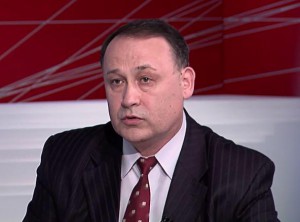 overnment in Armenia is premature. «In a fairly tight political and economic pressure from the West over the post-Soviet space, as well as in the context of Armenia’s EEU membership, it is still worth to keep the format of a presidential republic, at least for the next couple of years,» mentioned the expert in his interview to “RUSARMINFO”. He adds that there are political processes that make many countries, including the former Soviet Union gradually shift to a parliamentary form of government. But, as the experience and events of color revolutions show, it does not lead to good results. «In our view, the preservation of the presidential-parliamentary form of government today is the most acceptable form of government in Armenia,» concluded Alexander Gusev. Note that the process to amend the constitution has kicked off in Armenia, the results of which will be the shift from the presidential system to a parliamentary one. The final version of the constitutional amendments is not yet ready. On July 1-2, 2015 the expert commission will present its proposals to the Venice Commission. Thereafter, until August, discussions with political parties will be held, and then only the results will be submitted to the President. The constitutional amendments will be submitted to the Parliament in autumn.