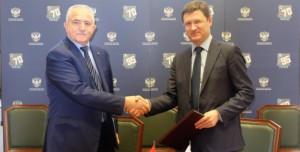 Russian Energy Minister Alexander Novak and Armenian Ambassador to Russia Oleg Yesayan signed today the Protocol amending the Agreement between the Governments of the two countries on delivery to the Republic of Armenia of natural gas, petroleum products and rough diamonds.

The protocol also provides for indefinite exemption from export customs duties on oil products and natural gas supplied from Russia to Armenia.

The press service of the Ministry of Energy has told RUSARMINFO that earlier the decisions on duty-free imports were made each year, and based on the current changes the oil products and gas will be duty-free delivered to Armenia until one of the parties decides to change the provision or to cancel the Agreement. The Ministry of Energy has also reported that the document won’t affect the gas price.