Franz Klintsevich: «The transfer of Russian S-400 to Armenia will change the balance of forces in the region»

Some Armenian media sources have even circulated the information on the deployment of the Russian 58th Army units along the Armenian-Turkish border. 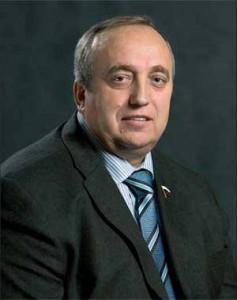 Placing the anti-aircraft missile systems S-400 changes the balance of security in the region and becomes a political subject, — says Franz Klintsevich, first deputy chairman of the Defense and security committee, the Federation Council of the Federal Assembly, the Russian Federation.

«The transfer of the S-400 to Armenia can cause a lot of political gossips. But the relations between Russia and Armenia are so effective and mutually beneficial, that in case of any danger within the framework of the CIS, CSTO and bilateral relations, Russia will able to allocate S-400 in Armenia in the shortest time and change the balance of forces in the region,»- mentioned Franz Klintsevich in his exclusive interview to RUSARMINFO.

According to him, S-400, no matter where placed, monitors the sky in a radius of over 400 kilometers and makes this area absolutely safe for any aircraft that flies low to the ground, high up in the air or in space. The level of effectiveness of this complex is extraordinary.

Franz Klintsevich denied the reports that the 58th Russian army had already deployed its units in the Armenian-Turkish border.

Note: The S-400 system is designed for high-performance aircraft destruction of strategic and tactical aircrafts, missiles, hypersonic objects and other means of air attack. It affects air targets at speeds up to 4800 m / s, at a distance of 400 km and an altitude of 30 km. Each system covers up to 10 shelling targets, using up to 20 missiles. It takes 5-10 minutes for its full deployment and combat readiness.