Russian Defense Ministry: Turkey buys oil from IS at 2 billion dollars per year 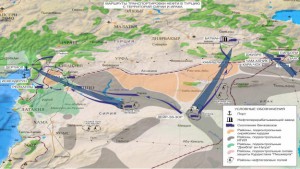 The Russian Ministry of Defense in a briefing with reporters submitted materials proving the involvement of Turkey and President Recep Tayyip Erdogan in the oil business of the «Islamic state».

«Russia has «irrefutable evidences” of the involvement of Turkey in the oil supplies from the territories controlled by the » Islamic State «(IS) organization banned in Russia,» said Sergey Rudskoy, Chief of the Main Operations Directorate of the General Staff of the RF Armed Forces.

According to the ministry, the highest political leadership of the country, President Erdogan and his family are involved in this criminal business.

Rudskoy also said that the oil supplies to Turkey from the territories under the control of the «Islamic state» were conducted via three main routes. To prove the Russian version, the Ministry of Defense presented the satellite images, which showed the clusters of fuel tankers and trucks, carrying oil to Turkey and heading back with ammunition for militants.

Rudskoy noted that the «Islamic state’s» previous income from the illegal supply of oil was $ 3 million. Currently, these revenues have decreased to $ 1.5 million (due to the impact of the Russian aviation strikes on the oil infrastructure of the IS). In addition, according to the military, the ISIS mobilized not less than 8,5 thousand of tankers in the oil trade. They are transporting to 200 thousand barrels of oil per day.

Note: As a result of strikes in Syria in the last two months the Russian aviation has destroyed 32 refinery complexes, 11 refineries, 23 pumping stations and 1,080 oil tankers, carrying oil.