The Simpsonyans: Armenian characters of the longest American cartoon 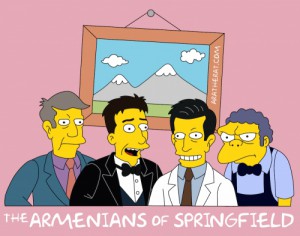 Internet portal aratherat.com published a rundown of the episodes of «The Simpsons» in which appear Armenians characters.

In the 23rd episode, the 10th season, Homer Simpson says that he has attended Chuck Garabedian’s training to learn how to save money.

In the episode titled «Million Dollar Abie”, the 17th season, Abie grandpa, who lives with the Simpsons, decides to commit suicide, and enlists the aid of Dr. Eghoyan. 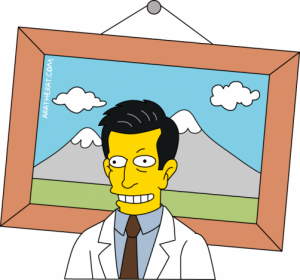 But the most significant performance of Armenian people is in the episode titled «The Principle and the Pauper”, broadcasted in 1997. Skinner begins to celebrate his twentieth anniversary as principal of Springfield Elementary School, when a man arrives claiming that Skinner has assumed his identity. Principal Skinner admits that his real name is Armen Tamzarian and that he had thought the true Skinner, a friend from the army, had died under a bombing in the Vietnam War. So, the false Skinner decided to take his “half-brother’s” name and fulfill his and the school council’s dreams.

It is noteworthy that the prototype of the false Skinner, Armen Tamzarian, a judge of the Supreme Court of California, after watching this episode questioned the authors why they had used his name.

Note: «The Simpsons» is the longest ever cartoon in the history of American television: 28 seasons of broadcast, and the very first episode was on TV in 1987.