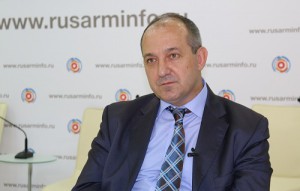 Vladimir Yevseyev, Head of the Center for Public Policy Research, military expert, answers the RUSARMINFO questions. RUSARMINFO: Will the Russian military base in Armenia be reinforced after the incident with the plane? Vladimir Yevseyev: In relation to these events, I believe that the Armenian air defense will be reinforced. The missile regiment, represented by the systems of S-300 with a limited-range interception, is currently located in the Russian base in Gyumri. We should expect to see more modern systems there, such as the S-300 air defense 1-or-2. They will control the border with Turkey and will be turned in a combat mode in case of the airspace violation by Turkey. RUSARMINFO: Recently, the Turkish military helicopters violated the airspace of Armenia. What steps will be taken in case of another violation of the Armenian airspace? Vladimir Yevseyev: In case of repeated violations of the air border of Armenia, the command to neutralize the aircraft should be given. That will be a good response to the unpunished activities of Turkey on the Syrian track. Five seconds are sufficient to make a decision on the destruction of the Turkish aircraft violating the Armenian border. RUSARMINFO: In your opinion, why Armenia has not officially reacted to the incident with the Russian plane? Vladimir Yevseyev: I think that Armenia is waiting for a signal from Russia. But Russia’s response is more important than the one from Armenia. I think Moscow should place those systems that can ensure the airspace defense not only of Armenia, but also of Nagorno-Karabakh. It will be a signal not only to Turkey, but to Azerbaijan as well. The allies of Turkey ought to think about the consequences in case of violation of not only Armenia’s, but also Artsakh’s airspace.