Head of the largest «RusHydro» energy holding in Russia, Nikolay Shulginov, on Friday announced about the willingness to sell three of the four energy supply companies within the framework of the decision to liquidate the non-core assets, according to “Kommersant”.

The newspaper says that in the future, «RusHydro» can sell other assets as well — for example, the Sevan-Hrazdan HPP Cascade, which produces about 10% of electricity in domestic consumption of Armenia. The cascade also supplies water to 70% of the agricultural lands in Armenia. 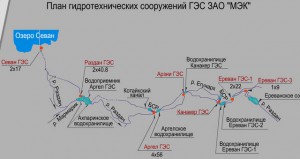 The large Russian energy companies, such as «TNS Energy» and «Evrosibenergo” have already expressed readiness to acquire the assets of «RusHydro».

Note: The Sevan-Hrazdan Cascade is a complex of hydro power plants located on Hrazdan River in Armenia. The cascade consists of 8 hydroelectric power stations, six of them on Hrazdan River and two on the Artashat irrigation canals. In 2011, «RusHydro» bought Sevan-Hrazdan hydropower plant from the “Inter RAO” company, the former owner of «Armenian electricity networks». In 2003, the asset became the property of “RAO EES” of Russia in the form of debt for the supplied nuclear fuel for the Armenian NPP. After the liquidation of “RAO EES” the asset remained on the balance of “Inter RAO”.