OSCE representatives face problems with hearing and eyesight in Karabakh 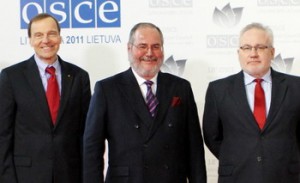 On October 27, the OSCE mission conducted monitoring of the line of contact between the armed forces of Nagorno Karabakh and Azerbaijan in the area of ​​the road Martakert-Tartar with the OSCE Minsk Group Co-chairs. During the monitoring the OSCE Minsk Group Co-chairs and the Personal Representative of the OSCE Chairman moved from Karabakh to Azerbaijan. It was at the very moment of border transition when the machine gun shots were conducted by the Azerbaijani side in the direction of the borders of Nagorno Karabakh Republic.

Despite the apparent violation of the truce, even during the monitoring, no response from the Co-Chairs of the OSCE followed.

In such cases, the OSCE is trying to remain neutral, so there won’t be any strict response to these apparent violations, — believes Vladimir Yevseyev, director of the Center for Public Policy Research.

«In the summer we have seen criticism of Azerbaijan by the West, but now there is an attempt to build a productive relationship with Azerbaijan, as Baku is improving relations with Moscow,» — the military expert told RUASRMINFO.

In addition, the OSCE Minsk Group depends on the «Brussels democracy», so we shouldn’t expect any objectivity in this case.

To some extent the OSCE follows the US policy, and Washington has inappropriately worsened its relations with Baku. Therefore, according to the expert, they will not spin the violation of the truce, though it happened on their watch.