Why CSTO does not react to military aggression against Armenia

As a result of yesterday’s shelling from the Azerbaijani side of the villages of Berdavan and Paravakar in the Tavush region of Armenia, three civilians were killed and two — wounded. At the meeting with co-chairs of the OSCE Minsk group — Igor Popov, James Warlick, Pierre Andre, and the personal representative of the OSCE Chairman Andrzej Kasprzyk held in New York Minister Edward Nalbandyan expressed his indignation in connection with the flagrant violations of the ceasefire regime by Azerbaijan which led to casualties among the civilian population. He also noted that Baku put into question the usefulness of meetings on the Nagorno Karabakh conflict, impeding the negotiation process. 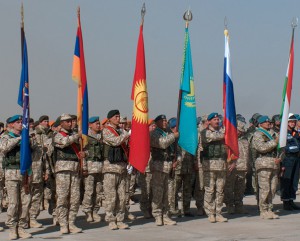 Armenia is a full member of the Organization of Collective Security Treaty (CSTO), which is designed to ensure the security of state borders of the participating countries, including Armenia. According to the 4th article of the CSTO, if one of the States parties is subjected to aggression by any state, this shall be regarded as an aggression against the CSTO.

«On the one hand, the CSTO response will not follow, until the Armenian leadership sends an official statement to the organization and brings the issue up for discussions. But on the other hand, taking into account the deaths of civilians, the CSTO must react in a mandatory manner,»— concludes Konovalov.