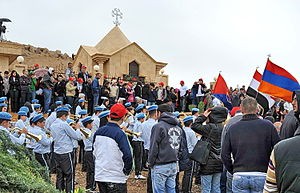 The Armenian community of Aleppo reported about the kidnapping. The incident occurred on the road Hanaseri, which is under the control of government troops of Syria, but frequently attacked by militants of the Islamic state. The militants of the «Islamic state» stopped the bus traveling from Syria to Lebanon, and forcibly dragged the two passengers of Armenian decent and took them in an unknown direction.

Yesterday the terrorists put fire on the Armenian and Christian quarters of Aleppo. The information about the wounded and dead Armenians is not yet uploaded.

In Syria against the terrorists and Islamic militants are fighting 17 000 Syrian-Armenian volunteers only from Aleppo, as it’s reported by the renowned Syrian journalist, editor-in-chief of the Syrian edition of Al-Masdar News, Leith Abu Fadel.

According to the Ministry of Diaspora of Armenia, up to the beginning of the armed conflict, Syria was home to about 100,000 Armenians, most of whom have already left the country. According to the RA MFA, about 14 thousand Syrian-Armenians has moved for permanent residence in Armenia.