Leith Abu Fadel: where the defense is kept by the Armenian militia, the IS fighters cannot advance an inch 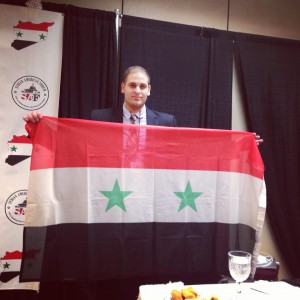 Leith Abu Fadel, a renowned Syrian journalist and chief editor of Al-Masdar News, wrote an article about the participation of the Syrian Armenians in the fight against the Islamic State. Armenians have become an important part of Syrian society since the XIth century, while retaining its exclusive identity and culture, and the role of Armenians in the construction of the Syrian army is an undeniable fact, — writes Leith Abu Fadel. “Tens of thousands of Armenian men were at the front of all the wars in the twentieth century led by Syria. Moreover, one of the founders of the Syrian Armed Forces was Aram Karamanukyan (1910-1996). Since the start of the Syrian conflict in 2011 and at the moment the Armenian community has remained loyal to the legitimate government of the country, taking part in the confrontation with army troops of anti-government forces. Armenians are known as “fierce fighters,” notes the author. According to him, most of the Armenians mobilized has joined the ranks of the 106th Brigade of the Republican Guard. This special unit is formed mainly of Christians: there are many natives of Aleppo, Arabs and Christians. In summer of 2012, Aleppo was attacked by the Free Syrian Army (secular opposition to the regime of Bashar al-Assad) and local Armenians took up arms to defend their city quarters. And did not be a bitter resistance on their part, the rebels would manage to capture the city’s historic neighborhoods. 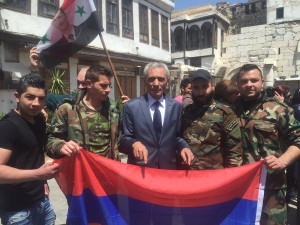 In Syria, in early 2014, the civilian leadership of the National Defence Forces was established to protect those areas where there were no military units. And, as the author writes, when the group began its operation to release Kesap captured by militants, 17 thousand Armenian volunteers from Aleppo joined them.

«In June of this year, the jihadist combined unit, including “al-Qaeda” groups, began a large-scale offensive in the west and north of Aleppo. After fierce and bloody clashes they were able to grab some areas, pushing government departments. The only areas where the Islamists failed to achieve success were the Al-Khalid, Al-Aziz and Sulaymaniyah districts. There the Armenian soldiers didn’t concede an inch of land.

The Syrian Armenians call Islamist militants “Ottoman terrorists” and say that they are defending their lands and their compatriots from the same forces that committed Armenian genocide in 1915. In 2011, Syria’s civil war broke out between government forces and militants of different armed groups, mainly financed by Saudi Arabia, Turkey and Western countries. According to the Ministry of Diaspora of Armenia, to the beginning of the armed conflict, Syria was home to about 100,000 Armenians, most of whom have already left the country. According to the Minister of Foreign Affairs of Armenia Edward Nalbandyan, for permanent residence in Armenia has moved about 14 thousand Syrian Armenians.