German Sterligov on Nagorno Karabakh: “It has already become home to us”

Russian businessman German Sterligov in his interview to Interfax has said that he is not going to break the ties with the Nagorno-Karabakh and plans to return there periodically. The founder of Russia’s first commodity exchange owns a small farm there, and his friends from the local community will take care of it. 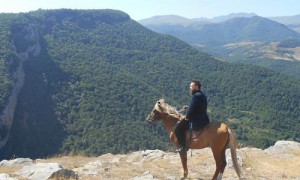 «The fact that we’ve returned to our motherland does not mean that we will not go back to Nagorno-Karabakh. For us, we can say, it has already become our home. We have a small farm there, our mill, where we make flour,» said Sterligov. Note: The Russian businessman with his family spent in the town of Shoushi of NKR a couple of months. Last week, Sterligov returned home. Upon arrival at the airport «Domodedovo», he was detained by Russian border guards and released after a two-hour conversation. In early July, Sterligov’s name was included in the list of undesirable persons of the Azerbaijani Foreign Ministry. The authorities accused the Russian businessman of illegal border crossing and stay in the Nagorno-Karabakh Republic.