RUSARMINFO press conference: Will the South Caucasus become the «bone of contention»? VIDEO

The RUSARMINFO multimedia center held a press conference themed: «The political situation in the South Caucasus: risks and forecasts», at which the participating experts discussed the situation in the South Caucasus region, the possibility of a confrontation between the West and Russia in the Caucasus, as well as identified the political risks and gave forecasts over the possible ways of development of events in the region.

Alexander Gusev — Head of the Center of CIS Strategic Development of the Institute of Europe, the Russian Academy of Sciences

Russia’s interests in the Caucasus are not limited to trade and economic issues only, they also include a political component. The Caucasian republics are key elements of the contemporary system of international relations.

In regards to the relations between Russia and the United States, in addition to Ukraine, the Caucasus and Middle East, the Kurdish problem, the situation in Turkey may become the bone of contention. The Americans nowadays are using every opportunity to bring Russia to its knees, but the South Caucasus will not become the bone of contention in relations between Russia and the West. 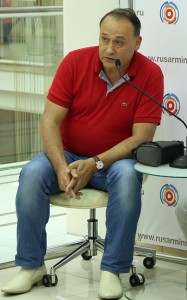 The situation in these countries will soon be affected by a number of internal and external factors, including Turkish. Turkey has always been an ally of Azerbaijan, and it will fully support Azerbaijan. However, the Turks will not build relations in a mode of confrontation with Russia. Today’s Turkey perhaps is not an independent player, but the country’s leadership clearly understands that there’s nothing to do in the EU, and nobody is waiting for them there.

China’s influence on the situation in the Caucasus is also exaggerated: for this country except the South Caucasus there are 8 other directions of the «Silk Road». Therefore, the Transcaucasian republics are considered as part of the global Silk Road, but no more. The means that China has planned to invest in the uplift of the economy of Kazakhstan are ten times more than the amount that the Chinese are expected to invest in all three South Caucasus republics.

Russia’s foreign policy is multi-directional, but, nevertheless, the involvement of Armenia in the EEU is a very important factor in foreign policy. The pragmatism of the current Azerbaijani leadership does not allow Azerbaijan to constructively integrate any CIS structure or the EEU. Georgia is very consistent in its actions in foreign policy and the economy. The country firmly follows the American way.

But despite the different foreign policy vectors of the South Caucasus republics, Russia has an impact on all these states, including Georgia, where the pro-Russian lobby is quite serious, counteracting the current authorities.

Sergey Markedonov — Associate Professor of the Foreign Area Studies and foreign policy department, the Russian State University for the Humanities

I would not link the whole Caucasus agenda to a confrontation between the West and Russia.

For example, on the issue of Nagorno-Karabakh, we have points of consensus with the United States, and they have been repeatedly confirmed by the president of the Russian Federation. In Georgia, there is an element of tough confrontation and divergence of positions. If you take the Islamist threat — IS, then there are some opportunities for cooperation. I would not say that in the relations between the West and Russia everything is clearly reduced to a frontal confrontation phase. 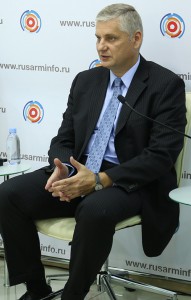 The same is with other subjects. Turkey is a formal member of NATO, moreover, the country has the second largest army after the U.S. in NATO, but I wouldn’t equate the interests of Turkey and the United States. Meanwhile, Iran’s interests and positions are different from Russian ones, especially in the economic sphere. As for the factors of influence, I would not say that the external factors are more important than internal. For ordinary people, the geopolitics is of little interest, but the fact of increase in tariffs for public services is very important for them. The internal factors can not be underestimated. From my point of view, a huge mistake of the Russian political science for the past 10 years is that we have tried to brush all the post-Soviet processes under the American interests. I would like to see Russia’s policy less emotional and more professional. One should never assume that the influence that we possess today can always exist; we should work constantly on this.

In today’s political, economic, social and cultural environment it’s very difficult to qualify the South Caucasus region as a single platform. Therefore, there’re no objective prerequisites for the South Caucasus to become the bone of contention between Russia and the West. Of course, there is the system of balances, but nevertheless, it is impossible not to pay attention to the subjective factors. The phenomenon of political leadership in a number of Caucasian states is something new in politics and political science, and it should be given more attention.

I do believe that Russia should become more active in Armenia economically, because there are no other serious reasons for the deterioration of Russian-Armenian relations.

The Russian-Azerbaijani relations are likely to improve, this is my personal opinion. You can talk about the degree of improvement, for example, it can be expressed in the emergence of a new radar station. It is needed as an object of a military facility and an example of military cooperation. And if the object appears, it means that Russia and Azerbaijan will restore their military cooperation.