Georgia is against and considers the railway restoration as an aggression

The Georgian Foreign Ministry has issued a statement which condemns the restoration of the Abkhazian section of the Georgian railway, demanding from Russia to stop these illegal actions.

Earlier, Deputy Defense Minister of Russia Dmitry Bulgakov told reporters that about 500 soldiers of the railway troops and more than 50 units of special equipment were taking part in the reconstruction works in the area of ​​the railway station from Ochamchira to the bridge over the Inguri River in Abkhazia.

Georgia has condemned «another aggressive and provocative action of Moscow», urging to stop those «illegal activities» in the territory of Abkhazia, as well as calling on the international community to take actions in connection with the «illegal policies against the sovereignty and territorial integrity of Georgia».

The fact that the Russian side is working on the restoration of the Abkhazian railway has been known since the beginning of August, however, the Georgian Foreign Ministry has issued a statement just now. Primarily, this is due to the fact that the reconstruction works have been confirmed by the high-ranking Russian military official, as mentioned by Chairman of the Georgian Institute of Development Studies, Giorgy Khukhashvili. 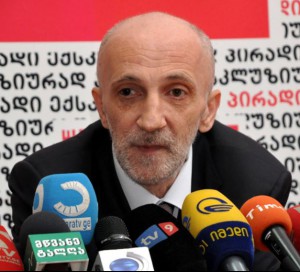 «It is a natural statement, since Georgia is concerned by the fact that the works of clearing the railway are carried out by the militarized parts of Russia. Obviously, Georgia can neither prevent, nor ignore this,» says Khukhashvili in his interview to RUSARMINFO.

At the same time, he notes that Abkhazia is the integral part of Georgia, and all the good actions aimed at improving the economic development and welfare of the residents of Abkhazia are appreciated. According to him, the restoration of the Transcaucasian railway can contribute to the solution of conflicts in the region, but there are a lot of questions, because of which the parties can not find a common solution. «But in the case of reaching a compromise by the parties to settle on the Psou railway station the Georgian custom officials in order to seal up the transit cargo between Russia and Armenia, the road will be opened», — believes the expert.

Note: The Abkhaz railway was part of the Transcaucasian railway system. The collapse of the Soviet Union divided it into Abkhaz, Armenian and Georgian parts. Because of the Georgian-Abkhaz armed conflict in 1992, the communication on this section of the railway was discontinued. As a result, up to this day there’s no rail connection between Armenia and Russia.