Causes of Azerbaijani aggression: violation of the ceasefire has two goals

In the period from August 16 to 22, Azerbaijan on the contact line with the NKR Defense Army violated the ceasefire regime about 900 times.

Violating the ceasefire in the Karabakh conflict zone, Azerbaijan is trying not only to conduct reconnaissance in force, but also to show its population that the government has not abandoned the aim to return Karabakh by any means, in his interview to RUSARMINFO has mentioned Azhdar Kurtov, editor-in-chief of RISI «Problems of National Strategy» journal.

«As Baku has some problems not only with Armenia and Nagorno-Karabakh Republic, but also with the United States, they need to show their citizens that the government is strong, able to respond to external challenges,” says Kurtov. 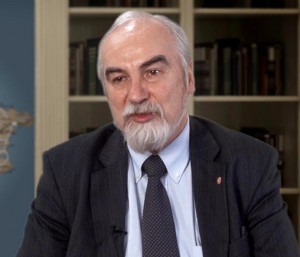 “To expend additional resources to ensure the defense capability, thereby detracting from more pressing problems in the social sphere, Azerbaijan is also intended to weaken the possibilities of Armenia to the rapid development in the socio-economic sphere,” believes the expert. At the same time, Azhdar Kurtov does not consider the possibility of the resumption of full-scale hostilities.

«Yes, there is pumping intensity, you can remember the downed helicopter, sniper duel, firing from heavy weapons from the Azerbaijani side, but this is not an unambiguous commitment to a full-scale aggression. The incidents on the contact line between the parties are not talking about a possible war. Azerbaijan will not do that,» concludes the expert. According to the press service of the NKR Ministry of Defense, in the direction of Defense Army positions were produced more than 16 thousand shots from various caliber weapons, including mortars 60.82 and 120 mm, and grenade launchers. In order to suppress the activity of the enemy’s, the forward units of the NKR armed forces resorted to retaliatory actions, after which the activity of the enemy was suppressed. In a shootout with Azerbaijani side four soldiers were killed and more than 15 wounded. The NKR Defense Army has no losses.