Aso Burhan: It is necessary to deepen the cooperation with Russia 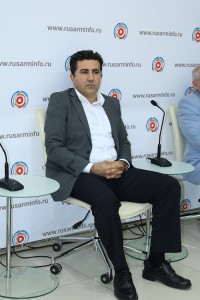 urhan — Representative of the Kurdistan Regional Government to the Russian Federation

After the Labour Party won the 13% of votes in the parliamentary elections in Turkey, President Recep Tayyip Erdogan became depressed. Turkish media reported that for three days he did not make any statements and didn’t show up in the public.

Within four years, Erdogan had been preparing and waiting for the results of these elections, expecting that the ruling party would won the majority votes, and he could again form a government. The Kurds thwarted his plans, Erdogan had to do something to get back at them.

The recent terrorist attack in the Turkish city Suruci became a kind of impulse to start fighting against the Kurds. The Turkish authorities said that the Kurds were involved in the terrorist attack and began to use it as a pretext for the outbreak of hostilities. I am confident that this plan has been developed for a long time. Since it is impossible for one day to decide and start the bombing of 154 points in northern Iraq, where the Iraqi Kurdistan is located. I do not exclude the possibility that the Turkish authorities themselves were involved in the terrorist attack in Suruci. As for the fight against the «Islamic state», Turkey still continues to assist them. In fact, the struggle is against the Kurds. Turkey is bombing the Kurdish civilians as the Kurdish guerrilla groups are hard to be reached in the high mountainous areas. The main thing that bothers Turkey is the formation of an independent state — Kurdistan. On one hand, there is the Iraqi Kurdistan, on the other hand – the Syrian one is formed. Moreover, the Kurds are located in Turkey. The creation of an independent state of Kurdistan is the dream of every Kurd, regardless of where it he/she is located, on the territory of Iran, Iraq, Turkey or Syria. At the moment, unfortunately, this plan can not be implemented. This project can not be realized without the support of Russia, as this country plays an important role in the region. Unfortunately, the Kurdish politicians do not pay special attention to the cooperation with Russia: their thoughts are primarily aimed at the West. While the West in the face of the United States uses them as a toy.