The martial law announced on Mount Ararat by Turkey 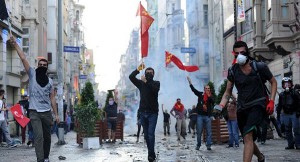 Because of the recent intensified outbreaks and terrorist attacks of insurgents from the Kurdistan Workers Party and the «Islamic state» militants, the local authorities of the eastern regions of Turkey declared certain areas as «special security zones». There are, in particular, the two provinces of Agyre and Tunceli. According to the Turkish news agency «Anadolu», in the «temporary military security zone» are also included the areas adjacent to the two mountains — Ararat and Tondrak in the territory of historical Armenia. These regions, in fact, are placed under the martial law: civilians are prohibited for the unauthorized passage inside the regions, and the army has received the order to open fire on any suspicious aims. A similar mode is set in some surrounding areas of Syria and Iraq to the south-east of Turkey. RUSARMINFO asked the chief editor of the «National Defense» magazine, Igor Korotchenko, to comment on the current developments.

«Each country implements the issue of combating terrorism on the basis of its own ideas about what should be done. The international practice, in this case, is not a criterion for the adequacy of certain decisions made by the political leadership of a particular country,» believes the expert. According to him, in the declared war against terrorism, Turkey carries out those activities, which, according to the country, are suitable. Recall that on July 24, Turkey launched a military operation against militants of the terrorist organization «Islamic State» (IS) in Syria and Turkey’s outlawed Kurdistan Workers’ Party (KWP) in northern Iraq.