Mikhail Delyagin: if Armenia is unable to enforce its laws, then it’s not the problem of Russian companies

«The entire process will be transparent. The audit will provide answers to all questions, » said Hovik Abrahamyan in his conversation with the Armenian journalists. However, the Prime Minister did not mention the expected timing of the audit and the names of the companies included in the list of auditors. In an interview to RUSARMINFO Director, Mikhail Delyagin, Director of the Institute of Globalization Problems, has expressed confidence that any outcome of the audit, which will allow the Russian company to continue the activities in the territory of Armenia, will be regarded as an absolute defeat among the Armenian society. «The Armenian society believes that Russia must always pay. If Armenia prefers to believe that the Russians should be blamed for everything, then let American companies to work in Armenia; live like Moldova, have joy, peace and happiness.» 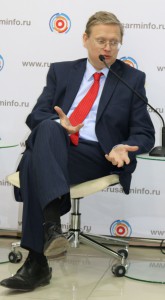 According to Delyagin, in Armenia the Armenian and American companies are never criticized, all claims are always and everywhere imposed only on the Russian companies. «The Russian companies operate in Armenia under the laws of this country. If Armenia is unable to enforce its laws, it is not the problem of the Russian companies. If your government is not able to conduct an audit of the cost of electricity, then it is the problem of your government.» In general, the claims against the Russian companies, according to Delyagin, are due to the fact that in the entire post-Soviet area it is becoming fashionable to hate Russia. «According to the mood that I catch in my Armenian colleagues, it turns out that Russia is to be blamed for everything. I believe that we need to go towards this approach and withdraw the military base from Armenia, to give a chance to settle everything on their own. It makes no sense to be friends with someone who does not want to be with us,» said Mikhail Delyagin. Recall that the decision of the President of Armenia to conduct an independent audit of CJSC «Armenian electric networks» (a subsidiary of INTER RAO) was adopted as a result of mass protests in Yerevan and other cities of the country in which it was demanded to cancel the decision of the Commission on regulation of public services of Armenia ( June 17), based on the suggestion of «Electric Networks of Armenia», to increase the electricity tariff by 7 drams (about 7 cents) per kW / h.