Stability in Armenia: since 2005, annually there are 200 000 starving Armenians 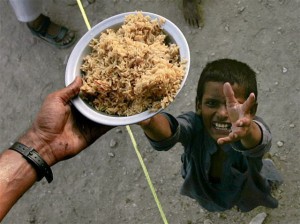 According to the UN Food and Agriculture Organization (FAO), in 2014-2016 it’s expected that the number of starving people in the world will decrease to 794.6 million or 10.9% of the total population of the planet. FAO data for Europe and Central Asia, which includes also Armenia, show that, since the 90s of the XX century to present day, the total number of starving people (9.9 million) reduced to 5.9 million (more than by 40%) According to the Food and Agriculture Organization, for the 2014-2016 in Armenia the 5.8% (200 thousand people) of the population will be considered as starving. In Russia, according to the same organization, the percentage of constantly starving people is less than 5% of the population. The wording of “starving” means that the person is unable to purchase enough food to meet the minimum daily energy needs for one year. FAO data have debunked the myth that in the Caucasus and Central Asia, due to national peculiarities of their cuisine, the average caloric intake is far above the world average. It turned out that in the Caucasus and Central Asia, the average calorie daily diet is 2,885 calories per day, less than the world average of 2902 kcal. In particular, in Armenia, the figure is about 2900 kcal. It should be noted that FAO has been studying data on malnutrition of the population of the post-Soviet republics since 1990. In particular, according to the FAO reports, if in the early 90s in Armenia almost one million were starving people, in the 2000s their number fell to 700 million, and since 2005 the number of starving people remains unchanged: 200 thousand people go hungry every year.