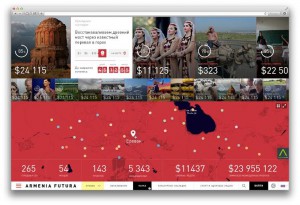 A common platform to unite the charitable and social initiatives of Armenians across the world… This is the goal of the initiators of the Armenia Futura foundation.

The authors of the idea set a goal: through a simple mechanism to satisfy the desire of each of the ten million dispersed throughout the world Armenians in their aspirations to contribute to the development of the two Armenian republics — Armenia and Artsakh.

The modern system of charity in the Armenian community generally suggests that one person donates a large amount for the implementation of a charity project. In this situation, the bulk of the Armenians, who burn with the desire to help their motherland no less than their more affluent compatriots, are deprived of the opportunity to donate at least one dollar to conduct a more suitable for them charity project. The Platform of the Armenia Futura foundation is to assure such an opportunity. The portal presents the projects at the same time carried out by different organizations or individuals charitable projects, for the implementation of which anyone, regardless of where in the earth he/she is, can instantly convert any amount from one dollar to infinity. An important distinction of the fund are communicative capabilities: the Platform, in fact, is a social network, whose members are united by a common purpose and, together or separately they choose the preferable size of their participation in its achievement.

The Armenia Futura foundation team currently is working on simplifying procedures for the transfer of money: the goal is to create a mechanism to assure than any benefactor can transfer money in one click. The on-line donors can see all the projects of the fund, the exact amount which is required for each project, and the amount that has already been collected. The creation of the platform is in the final stage, and the Platform initiators provide the possibility of granting the premium account to donors with the status of co-founder.

To date, the willingness to join the Armenia Futura foundation has already been expressed by 10 funds and 50 thematic projects in areas of education and science, historical heritage, environmental protection, as well as in the assistance for the poor.

The launching of the Armenia Futura foundation is planned in the first month of autumn, 2015.