Главная / Без рубрики / «Get up, Armenia»: A plan of actions developed by protestors

«Get up, Armenia»: A plan of actions developed by protestors 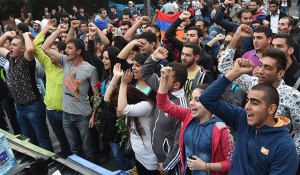 The «Get up, Armenia» movement in Yerevan announced another protest rally at the Freedom Square against the increase in electricity tariffs, as stated the information disseminated through the movement activists’ “Facebook” pages.

The initiative «Get up, Armenia» has developed a plan of actions: among all the capital residents, about 600 thousand families, will be distributed leaflets explaining the requirements for the abolition of increase in electricity tariffs. The initiative plans to convene protests throughout Armenia. Within 5 days, activists will block the central streets of Yerevan and other cities. If these measures do not give significant results, the protesters intend to urge citizens not to pay for utilities, including communication.

In his interview to 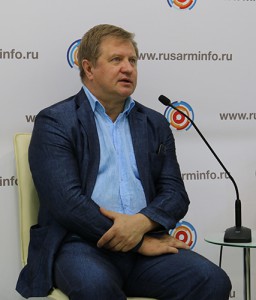 RUSARMINFO Vladimir Lepekhin, Director of the EurAsEC Institute, says that at the moment there is the prospect of promoting dialogue between the Armenian government and protesters. But at the same time the difficult economic situation may affect the mood of demonstrators, and they can set additional requirements. «In Armenia there are certain forces that are using this situation to their advantage, do not allow to reach a compromise and turn the confrontation into a normal dialogue. There are also many forces in the West, treating Armenia as a weak link after Ukraine, and they are interested in the continuation of these mass protests and its development into a more tough confrontation,” says Lepekhin. According to the analyst, the main blame for this situation lies with the energy companies, and on the block of the Armenian government, which didn’t foresee the consequences of the tariff increase. «If the tariff increase, in terms of energy and policy makers, is necessary then they should anticipate the possible reaction of the population. It was necessary to conduct explanatory works, organize events, discuss the need to increase tariffs and their validity. Unfortunately, this was not done,» assumes the expert.

Note: The decision of the Commission on regulation of public services to increase from August 1 the electricity prices by 16% provoked a protest that started in Yerevan on June 19. On the evening of June 22, a procession took place to the presidential residence on Baghramyan Avenue. On the morning of June 23 the police used special equipment and dispersed the demonstrators. Nearly 240 people, including journalists, were taken to the police stations, 25 people sought medical help. Once the authorities have offered to conduct an audit of «Armenian electricity networks» (a subsidiary of INTER RAO), the intensity of the protest fell.