Главная / Без рубрики / Duduk, Khachkar, Lavash and epic of “David of Sasun” in the list of the cultural heritage of mankind

Duduk, Khachkar, Lavash and epic of “David of Sasun” in the list of the cultural heritage of mankind

The history of Armenia is rich in its unique manifestations that have given rise to cultural diversity, becoming part of the global consciousness. Some of them are included in the list of intangible cultural heritage by UNESCO.

UNESCO World Heritage — natural or man-made objects, the priorities in relation to which, according to UNESCO, are their preservation and promotion by virtue of special cultural, historical or environmental significance.

RUSARMINFO presents the list of Intangible Heritage by UNESCO in Armenia.

Duduk In 2005, the Armenian duduk music has been included in the «Representative List of Intangible Cultural Heritage of Humanity.» Duduk or tsiranapokh (made of apricot wood) is a woodwind instrument, shaped like a cylinder with two-row spaced drill holes. The apricot in Latin sounds like «Armeniak», the «Armenian Fruit».

Khachkar (cross-stone) — a kind of Armenian architectural monuments, which is a stone stele carved with a cross. In November 2010, the art of cross-stones with the wording «Symbolism and craftsmanship of Khachkars: Armenian stone crosses,» was included in the UNESCO representative list of intangible cultural heritage of humanity. Khachkar is a vertically erected stele with carved ornament in the middle of the cross, resting on a solar symbol, or eternity, and is accompanied by vegetative-geometric, zoomorphic motifs carved as anthroponymic figures. The Cross embodies victorious and salvific meaning and is presented in the center of the cosmos as a tree of life on a paradise mountain, connecting the future and eternity. For the production of the cross-stone the masters tend to use local material — basalt or yellow-red tuff. 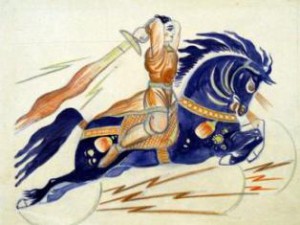 «David of Sasun» — an ancient Armenian epos, which connects the story of four generations of Sassoon, a geographical enclave of the Armenian plateau, known for its rich folklore and indomitable spirit. The epic was formed in the tenth century on the basis of oral tradition, to betray the centuries. The earliest written mentions of the epic are found in the XVIth century among the Portuguese travelers. For the first time the epic was written down in 1873 by Garegin Srvandztyan, a well-known researcher of folk literature, based on the telling of a peasant named Karo who lived in the village of Arnist. There are currently academic editions of fifty variants of the epic, recorded in different regions of Armenia. The epic consists of four branches. The first is titled “Sanasar and Baghdasar”, the second – “Mher the Elder”, the third – “David”, the fourth – “Mher the Younger”. In 2012, the epic of «David of Sasun» was included in the List of Intangible Cultural Heritage of Humanity.

Lavash is an unleavened white bread, thin pitas made of flour. In the English-language editions it is also called the «Armenian brittle bread», «Armenian tortilla», «brittle bread.» Lavash is a flat, very thin, about 2-5 mm oval pita of more or less standard size, about 90-110 cm in length, a width of about 40-50 cm, weighing not more than 250 grams. The stored pita is left aside piece by piece to be cooled, after which it’s stacked in 8-10 rows. In the air it dries quickly and can be stored dry for a long time. On November 26, 2014 the 9th meeting of the Intergovernmental Committee for the Safeguarding of the Intangible Cultural Heritage of UNESCO in Paris decided to include the Armenian Lavash into the List of the Intangible Cultural Heritage of Armenia.