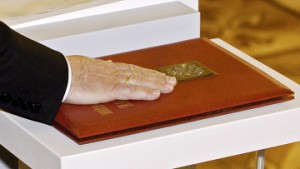 The preliminary version of the new Constitution of Armenia is published. The amendment process was initiated in 2014 by Armenian President Serzh Sargsyan. The project is available on the official website of the Ministry of Justice of Armenia.

Under the new Constitution, Armenia passes from a semi-presidential model of governance to the parliamentary. The Parliament will be elected under the proportional electoral system, and the number of MPs will decrease from 131 to 101.

The President of the Republic, under the new Constitution, loses most of the powers which assigned to him/her by the Constitution and is appointed by the Electors’ Assembly for a term of 7 years, not more than once, says the article 124th. According to the 125th article, the Electors’ Assembly will consist of members of the National Assembly and equal number of representatives elected by local governments. The Chapter 6 the new Constitution assumes the status of the Government as the highest state authority. The Government develops and implements the internal and foreign policy. In wartime, the Commander in chief is the Prime Minister, according to the 154th article of the draft.

According to the draft of a new Constitution, the country’s top officials — President of the Parliament and Prime Minister, are not limited in their terms. In the case of amendments, the President Serzh Sargsyan, whose mandate expires in 2018, could become either the prime minister or the Speaker of the National Assembly.

Senior researcher of the Russian Institute for Strategic Studies Konstantin Tasits in his interview to “RUSARMINO” says that the issue of constitutional reforms in Armenia is not the most important. There are more mundane issues connected with the fight against corruption, optimization of the existing legislation, economic problems, and that they should be the focus of Armenian authorities.

«It is obvious that the Armenian authorities still want to optimize the governance system, including the power to solve the problem of reproduction. That is, that the ruling elite in the next elections can feel itself more comfortable. It can also lead to the fact that the current president of Armenia will be able to continue to run the country as the Prime Minister,” notes the expert. Most of the opposition forces of Armenia officially have so far refrained to express an opinion on the draft of the new Constitution. Only the Armenian National Congress has expressed its position, qualifying the amendments as unacceptable. The exact date of the vote on the amendments to the Constitution is not yet known. It is expected that the vote will be scheduled for September 2015.