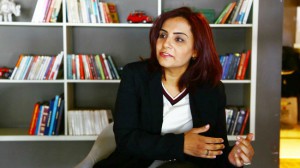 MP Doghan is planning to fight for freedom of speech standing against such statements that inspire hatred. «However, I will work not only with the Armenians, since Alawites, Kurds and Greeks are also treated unfairly. In general, we have serious problems relating to non-Muslim minorities. It all starts with the hatred,» says Selina Doghan, adding that at present the «cultural genocide» is implemented in Turkey. Selina Doghan from the opposition Republican People’s Party is a social democrat leader elected on behalf of the Armenian community of Istanbul.