A 55-year-old Armenian is confronting ISIL 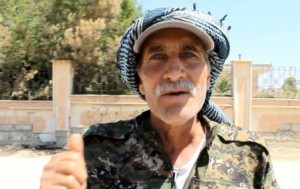 Dozens of fighters of different nationalities have joined the armed struggle against the «Islamic State», among them are 70 Armenian fighters.

55-year-old Syrian Armenian Barkhodan joined the squad of National Defence, consisting of local Kurds and he is involved in the fight against «Islamic state» side by side with them. «We are fighting to protect the Armenian people as well from the threat of ISIL. We do not put the difference between Arabs, Kurds, Christians and Muslims. For many, the main reason for being here is the need to eliminate these enemies of mankind. ISIL militants kill women and children, and when hundreds of innocent people were killed by their gunmen in Kobani a few days ago, I took a decision to fight against these barbarians, despite my age,” told the 55-year old soldier to the Syrian ARA-NEWS. Note: The Armenian community in Syria began to take shape back in the IV-Vth centuries. The number of Armenian community of Syria has increased sharply in the early 20th century, as a result of the Armenian Genocide conducted by the Ottoman Turkey. According to the data for 2011, to the outbreak of civil war in Syria there were about 100 thousand Armenians. To this date, there’s no accurate data on the number of the Armenian community in Syria. As a result of the military actions, the Armenian families are forced to urgently leave the places of their permanent residence.