Главная / Без рубрики / The dispersal of demonstrations in Yerevan: Chronicle of Events. VIDEO

The dispersal of demonstrations in Yerevan: Chronicle of Events. VIDEO 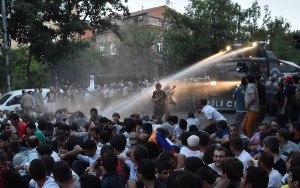 On June 22, the Armenian activists opposing to the increase in electricity tariffs organized a protest and sit-on rally on the Baghramyan Avenue in the center of Yerevan. In the morning of June 23, at about 05:30 by local time, the police violently broke up the demonstrators and used water cannons. The police was armed with batons. According to the preliminary reports, as a result of the crackdown, about 20 protesters and 11 police officers were injured. 5 protestors with head injuries, currently, are in the intensive care unit of the medical center of Armenia.

About the night events in Yerevan and the current situation in the Armenian capital reports to the “RUSARMINFO” agency, Arshaluys Mghdesyan, a freelance journalist based in Yerevan.

According to him, the protesters first gathered at the Freedom Square, organized a protest there, demanding to cancel the decision to increase the electricity tariff in Armenia. Then the activists were self-mobilized and forwarded to the presidential residence on the Baghramian Avenue. First, the protesters demanded to meet with President Serzh Sargsyan who would promise them to cancel the decision on the electricity tariff increase.

By that time, near the President Residence the police forces equipped with rubber truncheons, shields and helmets were dislocated. The police cordon blocked the movement of the demonstrators on the avenue. The demonstrators decided not to go to the collision and continued the rally with a sedentary picket. According to the police, about 2-3 thousand activists were participating in the rally.

The presidential administration proposed to form a delegation of five demonstrators to enter the President Administration building and discuss the requirements of the protesters. The activists rejected this proposal. And they began to chant political slogans, calling to continue the struggle and achieve Serzh Sargsyan’s resignation. 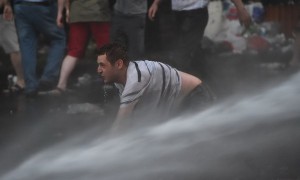 ged the protesters to vacate the area, otherwise, warning that the rally would be considered as illegal and the police would be forced to use force. The journalists were asked to leave. They were also warned about the beginning of a special operation.

At about ​​05:30 am by local time began the crackdown on demonstrations. The police cordon moved to the demonstrators sitting on the pavement, using the police water canon jets against the protesters. In the course of military actions, the police also used batons. According to the preliminary data, 237 people were detained. They are now in the police stations. Against some of them have already been instituted a criminal case under the «Hooliganism» article. According to unconfirmed reports, some of the detained protesters were taken to the police stations located in the vicinity of Yerevan, as there were no vacant places in Yerevan stations.

Currently, the situation in Yerevan is more or less calm, the activists have gathered before the central building of the Armenian Police. They are demanding the release of the detained friends. The MPs and human rights defenders have also joined them.

According to some reports, the activists are planning to continue their protest tonight, gathering at the Freedom Square.

Note: The activists in Yerevan protest against the increase in electricity tariffs by 7 AMD and require the authorities to cancel the decision.