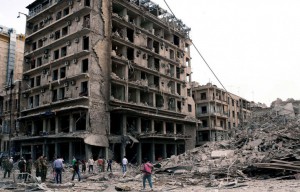 As a result of a rocket attack by terrorists on the Prefecture of Qasr Al Chambers in Aleppo  two Armenians were killed.According to the Armenian newspaper «Gandzasar», published in Syria, among the killed civilians were EduardPetrosyan, a missionary of the Armenian Evangelical Church «Word of Life» in Yerevan, and Karo Mkrtchyan, a resident of Aleppo. Prior to the war events in Syria, there were about 60 — 70 thousand Armenians. More than half of them lived in Aleppoand the other half was scattered in such cities as Latakia, Homs, Kamishli, Hasaka, Yakubu, Raqqa, Kessab and Damascus.