Главная / Без рубрики / Is Yerevan under the risk of flood?

Is Yerevan under the risk of flood?

Recently, the chief hydrologist of «Armhidroenergo» Roland Manukyan has warned in an interview to the «Zhamanak» newspaper that Tbilisi flooding can happen again, but this time in Yerevan.

The “RUSARMINFO” agency has asked Zaruhi Petrosyan, Head of the Center for Operational Forecasts of «Armenian Hydrometeorological», to comment on the disaster possible recurrence, which took 19 lives in Tbilisi. According to her, the Tbilisi flood cannot happen again in Yerevan. “We don’t have any available forecast that a similar phenomenon could be repeated in Armenia. Even in the case of heavy rainfall, there’re no threats for Yerevan,» she assured.

In regards to the possible flooding of Getar and Hrazdan rivers, Zaruhi Petrosyan says that the actual problems relating to these rivers have already been resolved.

rainfalls are expected in the next four days during the daytime in Armenia.

Speaking of the weather phenomenon occurred on the territory of Tbilisi, Zaruhi Petrosyan explains that such a climatic phenomenon is characteristic throughout the Caucasus in the period from May to June. 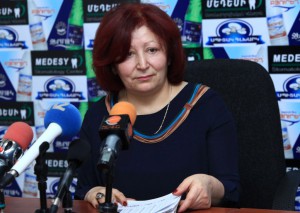 ight in Tbilisi were flooded houses and central streets, the zoo, private shelter for dogs of Tamaz Elizbarashvili, and the infrastructure was damaged. The flooding in Tbilisi occurred because of the heavy rains that caused landslides

on the outskirts of Tbilisi, with the result that Vere river was blocked and the water level rose sh