Tbilisi is waiting for an updated list of dead and missing

The death toll in the floods in Tbilisi has increased to 15, Georgian media reports. In the Mziuri park on Monday, June 15 were found two male bodies, both are victims of the flood. One of the men was in the form of a lifeguard.

Prior to that, it was reported that 13 people are confirmed dead and more than 20 among missing, including, presumably, two more Armenians.

The National Security Council and Crisis Management Force under the auspices of the Georgian government have indicated that in the near future will be issued an updated list of the dead and missing. 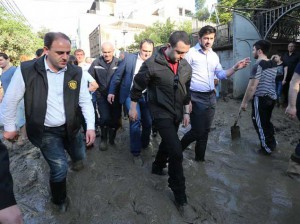 As for the animals escaped from the zoo, the Prime Minister of Georgia Irakli Garibashvili at a session of the Emergency Headquarters said that there’re no more predators on the streets of Tbilisi. «According to the information provided by the zoo, currently, there’s no predator outside,» said Garibashvili. The zoo administration said that as a result of the floods half of the animals didn’t survive. On Sunday night in Tbilisi were flooded houses and central streets, the zoo, a private shelter for dogs of Tamaz Elizbarashvili, the infrastructure was damaged. The flooding in Tbilisi occurred because of the heavy rains that caused landslides on the outskirts of Tbilisi, with the result that Vere river was blocked and the water level rose sharply.