The Armenian delegation in Baku kept under the heavy guard VIDEO 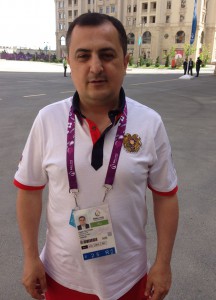 “RUSARMINFO” publishes the interview of the head of the Armenian delegation press service at the European Games in Baku, sports commentator of the Armenian 1st channel Karen Giloyan. «The first group of the Armenian national team consisting of six athletes arrived in Baku last night. Accompanied by the Azerbaijani security service officers the group members were taken to the Olympic Village. The Armenian team is accommodated in the building 7/5. In the same building has settled the Swedish delegation, among the athletes of which is an Armenian Greco-Roman wrestler with Barseghyan surname. « According to Karen Giloyan, the Armenian delegation is under a 24-hour surveillance by the security personnel of Azerbaijan. «On this occasion we have reached a bilateral agreement. We will also inform the security about our movements in order to avoid possible misunderstandings. Neither we, nor the hosting side needs this.” The sports commentator of the 1st Channel of Armenia also shared some details of the schedule of the upcoming performances of the Armenian athletes. «On June 13 Greco-Roman wrestler Roman Amoyan will be the first to step out on the arena, and I hope our athletes will perform well, since there are no obstacles to win there,» said Karen Giloyan. The Armenian team intends to go beyond the territory of the Baku Olympic village only in the days of the competition, adds Giloyan. «It is clear that the competition will be attended by a large number of fans and the Azerbaijani provocations are possible. In any case, we were warned about it and asked not to succumb to provocations. » Karen Giloyan also suggested to Armenian fans to follow the performances of the Armenian athletes on the 1st channel of Armenia. Note that the first European Games will be held in Baku from June 12 to 28.