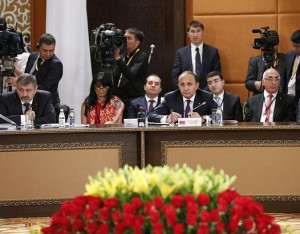 Armenia supports the negotiations with Iran on a free trade zone and is ready to assist in their organization. This was stated by Prime Minister of Armenia Hovik Abrahamyan at the meeting of the Intergovernmental Council of the EEU, TASS reported. «The prospect of the conclusion of preferential trade agreements with Iran seems relevant. This will allow the Member States of the Union to gain access to markets and major transit routes of the Middle East ,» said the head of the Armenian government. «In this regard, I wish to reiterate the readiness of the Armenian side to organize such a meeting between EEU and Iran. I think that the experience on the issues of trade and economic cooperation with Iran that has gained Armenia, the only EEU country with a land border with Iran, will be useful to our partners ,» mentioned Abrahamyan.