Today, at the press center of the «RUSARMINFO» agency took place the presentation of the book «Karabakh Diary» authored by Ashot Beglaryan, a writer and journalist, assistant to the President of the Nagorno-Karabakh Republic. The book includes essays, articles, reports, interviews and sketches, written during the war between Nagorno Karabakh and Azerbaijan (1992-1994 years), as well as materials, special events and actual problems of the postwar period. Much of the information contained in the book has been published for the first time ever. «What is the value of this book? During the war, I worked as a war correspondent, wrote notes, prepared reports from the scene. All these materials have been preserved by me, the book is written in the real-time context,» says the author. «Karabakh Diary» consists of three parts: field notes of Beglaryan, his articles and interviews. The third part of the book tells about the life of Nagorno Karabakh today. 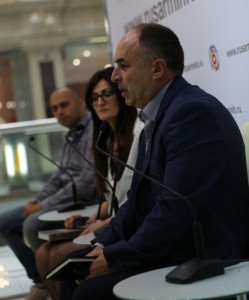 The materials of the book are accompanied by rich illustrations, the author of which is Gagik Siravyan, a Yerevan based artist. The «Karabakh Diary» is printed by the «Tparan» publishing house on the initiative of the “Zham” magazine and is considered as the first publications of a series of books titled «Library of Zham Magazine”. 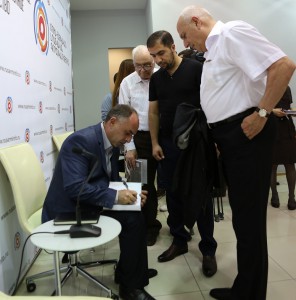 Ashot Beglaryan was born and lives in Stepanakert. He participated in the defense of Nagorno-Karabakh, was seriously wounded: the military theme is particularly close to him not by chance. His articles, short stories and essays have been published in numerous Armenian and foreign literary and socio-political publications and websites. Based on his story was released the «Shooting House» feature movie. He is the author of five collections of short stories and novels.