Liturgy in Vatican: Pope Francis waits for an answer. 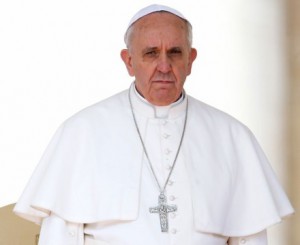 The first genocide of the 20th century: Pope Francis essentially repeated the words of Pope Johan Paul II, who said that during the liturgy in 2001 year. However, in 2015 the words of  Pope Francis had the effect of an unexploded bomb. The spiritual leader of Catholics with his statement not only captured the world attention to the problem of recognizing the Armenian Genocide in the Ottoman Empire, but also challenged those who still do not recognize the Armenian Genocide. In the civil world the statemant of such a high-ranking dignitary can not remain unanswered. Proof of this  — Turkey’s reaction, which quickly recalled its ambassador from the Vatican. But, apparently, the head of the Catholic Church reaction Ankara worried at all. Pope Francis waits for a response from those countries that still do not recognize the Armenian Genocide. April 24 — the decisive date for those to whom the Pope addressed.

On April 12 in Vatican, in St. Peter’s Cathedral the Pope Francis served the liturgy devoted to 100-year anniversary of Genocide of Armenians in the Ottoman Empire. The Pope Francis said in the speech that in the 20th century the mankind endured «three big unprecedented tragedies» is a  genocide of Armenians, Nazism and Stalinism. The pontiff characterized the tortures transferred Armenians as «the first genocide of the 20th century. » «Concealment or denial of the evil is similar to the bleeding wound which wasn’t bandaged», — Francis told. During a liturgy the Pope Francis ranked Armenian sacred, the poet and the theologian of the X century Grigor Narekatsi as an assembly of teachers of church. The statement of the pontiff for Genocide of Armenians evoked a wide response in world mass media: known foreign editions published this news. As expected, in Ankara negative reaction followed: they decided to withdraw the ambassador from Vatican for consulting. After the end of liturgy the Catholicos of All Armenians Garegin II thanked the pontiff and addressed with the speech to all believer people. Garegin II noted that the Armenian people in the fight for national identity and Christian belief learned a set of troubles, resisted to numerous tests, fell a victim of the most terrible and planned crime committed 100 years ago by Turks in the Ottoman Empire. «Our people live in the blockade which is carried out by Turkey and Azerbaijan fight for independence of  Nagorno-Karabakh and universal recognition of Genocide of Armenians today», – he noted. The Catholicos of All Armenians added that in due time the humanity didn’t manage to prevent Genocide of Armenians, to eliminate its consequences, as led to new genocides in Cambodjiya, Rwanda, Darfur, to the Holocaust. «Today people and the nations suffer in wars, the conflicts, because of terror, are exposed to persecutions, people pay with life for the belief», — he told. The head of the Great House of  Kilikiysky Aram thanked I Catholic Church for help given to Armenians during Genocide. He also reminded that in 1915 the Pope Benedict XV addressed with the letter to the authorities of the Ottoman Empire, demanding to stop slaughter of Armenians.

The Liturgy in the Vatican attended President of Armenia Serzh Sargsyan, the Patriarch of the Armenian Catholic Church Nerses Bedros XIX, the head of the Russian and the Novo-Nakhichevan diocese of the Holy Armenian Apostolic Church Archbishop Ezras Nersisyan, as well as prominent figures of the Armenian Diaspora of  Russia, including the initiator and creator of the Armenian Museum of Moscow Ruben Grigoryan, whose main purpose is not only to inform about the tragic events of 1915, but also to prevent them in the future.