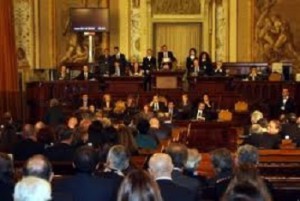 On April 21, the Sicilian Regional Assembly unanimously recognized the Armenian Genocide, reports the Press Service of the Armenian Foreign Ministry. Thus, Sicily has become the 105th regional structure of Italy to recognize the Armenian Genocide at the level of local governments. By the adopted resolution Sicily expresses its support and solidarity with the struggle of the Armenian people for the recognition of the historical reality. The document was presented by deputies Kordaro Salvatore, D’Azero Antonino¸ Papale Alfio Grasso and Bernadette Felice. The agreement on the resolution was reached at the end of November of 2015 at the meeting of Extraordinary and Plenipotentiary Ambassador of Armenia to Italy Sargis Ghazaryan with Chairman of the Regional Council of Sicily Giovanni Ardizzone. The Sicilian Parliament is one of the oldest parliaments of the world (founded in 1097) and compared with the parliaments of other autonomous regions in Italy it has the most extensive powers. Up to this date, the Armenian Genocide of 1915 has been recognized by 22 countries. The first country to officially recognize it was Uruguay in 1965. The Parliament of Italy recognized the Armenian Genocide in 2000.