Russian experts on Aliyev-Kerry meeting in absence of Sargsyan 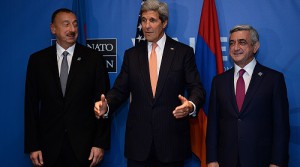 U.S. Secretary of State John Kerry met today in Washington with Azerbaijani President Ilham Aliyev. During the meeting they discussed bilateral and economic issues, as well as touched upon the Karabakh issue, reports the U.S. State Department. John Kerry expressed concerns about the violence on the contact line between the Armenian and Azerbaijani armed forces. “We want to see the final resolution of the Karabakh conflict. The issue should be resolved through negotiations, we have worked on it for a long time,” said the Secretary of State. Armenian President Serzh Sargsyan is also on a working visit in the United States, but the U.S. leadership hasn’t planned any meeting with him. 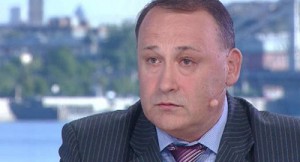 The meeting between Ilham Aliyev and John Kerry and the absence of such a meeting with Serzh Sargsyan is dictated, first of all, by the United States’ position in relation to Turkey as a NATO member, — says Alexander Gusyev, head of the CIS Center for Strategic Development at the Institute of Europe, Russian Academy of Sciences. “Azerbaijan is a strategic partner of Turkey, a member of the North Atlantic bloc, while Armenia is a CSTO member. In this situation, John Kerry chose from one of the two presidents. However, given the specificity of the Karabakh conflict, Kerry should meet with one and another. But self comes to the mind,”- told RUSARMINFO Alexander Gusyev. 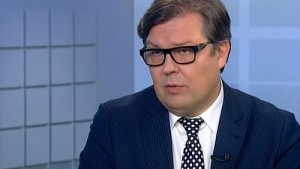 This meeting does not mean that the United States prefer Azerbaijan against other countries in the South Caucasus, — says Alexey Martynov, head of the International Institute of the Newest States. “Such conflicts as Nagorno-Karabakh can not be solved unilaterally. After the meeting, the representatives of the United States will hold talks with representatives of Yerevan and Stepanakert, as a third party to the conflict,” told RUSARMINFO Alexey Martynov. Armenian and Azerbaijani Presidents Serzh Sargsyan and Ilham Aliyev have visited the U.S. to attend the Nuclear Security Summit in Washington.