Главная / Без рубрики / Opinion: «Erdogan may even offer to admit ISIL to UN»

Opinion: «Erdogan may even offer to admit ISIL to UN» 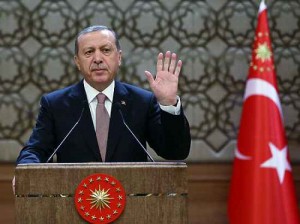 Turkish President Recep Tayyip Erdogan has called for the UN Security Council reforms, offering to expand it to 20 succeeding each other member states out of the 196 states of the world, Anadolu reports. Currently the permanent members of the UN Security Council are the U.S., Russia, China, France and Britain. “The world is more than the five permanent UN Security Council members. These five countries can’t define the fate of world’s 196 countries. They have no right to do so. This system needs to be reformed,” said Erdogan. Erdogan is automatically adopting any action that would hurt Russia, and the Turkish President, who’s Islamizing the country and collaborating with the ISIL, aims for a UN Security Council seat, — says Victor Nadein-Rayevski, senior researcher at the Institute of World Economy and International Relations, the Russian Academy of Sciences. “Turkey became a UN member without any reason; the country was Hitler’s accomplice, for which it should be punished. Now Erdogan can even offer to recognize the ISIL and admit it to the UN,” told RUSARMINFO Victor Nadein-Rayevski.

According to the historian, the format of the five permanent members of the UN Security Council made it possible to avoid a new world war. “Erdogan is making international legal changes in his policy in order to continue bloodsheds inside the country. But Erdogan’s proposal can’t not be released, so there’s no need to speak of the consequences,” colluded Victor Nadein-Rayevski. The proposal made by the President of Turkey challenges the results of the Yalta Conference in 1945, in the scopes of which was formed the UN ideology. The agreement reached between Stalin, Churchill and Roosevelt recognized the principle of unanimity of the great powers, the permanent members of the Security Council with veto power (the United States, Russia, China, Britain and France), as a cornerstone of the United Nations activities.