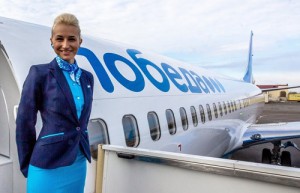 The Russian low-cost carrier “Pobeda”, included in the “Aeroflot” Group, has received approval to fly to Armenia. The corresponding document is published on the Russian Federal Air Transport Agency website.

“Pobeda” has received the license to conduct flights to Yerevan-Sochi for four times a week. Currently, the average ticket price of other aircompanies on this route is about 7,000 rubles.

“Pobeda” flight prices are not published yet, but the low-cost carrier has fixed the minimum price at the level of 999 rubles. This cost is provided with all the fees, includes luggage weighing no more than 10 kilograms.

The average cost of a direct flight from Moscow to Yerevan varies from 14,495 rubles to 15,425 rubles, depending on the season.

“Pobeda” will also operate flights from Moscow to Montenegro (Podgorica and Tivat) and Cyprus (Larnaca and Paphos).

“Pobeda” carrier was founded in September of 2014, replacing the other budget carrier – “Dobrolet”, which in the same year stopped operating after being included in the EU sanctions list because of the flights to Crimea.