Opinion: “Baku is absolutely powerless in visa issues between Abkhazia and Karabakh” 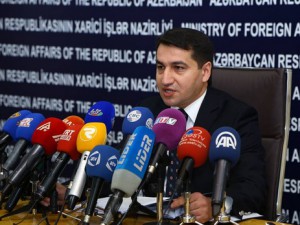 Azerbaijani Foreign Affairs Ministry official representative Hikmet Hajiyev has announced that the introduction of a visa-free regime between Abkhazia and Nagorno-Karabakh Republic is illegal.

“Azerbaijan supports the territorial integrity and sovereignty of Georgia and calls on its citizens not to make visits to the territory which are not under the control of the Central Georgian authorities, without the consent of the relevant structures of that country,” said Hikmet Hajiyev.

Baku is absolutely powerless in this situation and can not in any way affect the bilateral relations of Abkhazia and the Nagorno-Karabakh Republic, — says Alexander Krylov, President of the Scientific Society of Caucasiologists.

“As usual, Baku makes loud but meaningless statements, such as the note of protest in connection with the Russian loan to Armenia for the purchase of arms. They do not have any method of pressure on Abkhazia and Karabakh, so the only thing they do is the dissemination of loud statements, which are part of their propaganda,” told RUSARMINFO Alexander Krylov.

According to the expert, expressing its support for the territorial integrity of Georgia, Azerbaijan tries to involve it in this diplomatic game to achieve the same dramatic statements. But Georgia will not touch the Nagorno-Karabakh issue and once again will accuse Russia of the occupation of their lands.