Alexander Krylov on discipline issues at Russian military base in Armenia 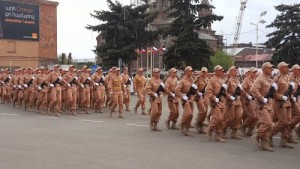 During the past week another resonant case over the 102nd Russian military base in Gyumri, when 26-year-old contract serviceman Sergey Surnikov under the influence of alcohol tried to break into one of the apartments in Gyumri and then was taken to a local police station, was in the limelight of criticism in the Armenia media. Such cases should not remain unpunished, because they somehow affect the Armenian-Russian relations, — says Alexander Krylov, head of the Scientific Society of Caucasian Studies. “The guarantee that such incidents will not affect the nature of the Armenian-Russian relations is to publicly punish the guilty: this is possible to achieve through maximizing the coverage of those topics in the Armenian and Russian media. Not only should the offender be punished, but also the immediate superior and those who send this sort of unreliable soldiers,” told RUSARMINFO Alexander Krylov. However, according to the expert, under the most perfect command of the military base still the recurrence of such incidents cannot be completely avoided, and even the Armenian part in this will not help.

“We are talking about the army. It is very specific body, but we cannot do without it. The presence of the Russian troops in Armenia is a forced necessity, without them neither Russia nor Armenia can move on,” stressed Alexander Krylov. The expert also underlines the need to move on a contract basis at the Russian military bases abroad, which will improve performance for military discipline. “In the formation of the military base in Armenia they should take into account that it’s is an overseas territory. Therefore, it is necessary to form it in a special way, not allowing psychologically unbalanced persons like Valery Permyakov to pass military service abroad. The base should be formed entirely on a contract basis comprised of professionals who have life experience and military background,” concluded Alexander Krylov. The 102nd Russian military base is deployed in Gyumri. Over the past year two high-profile crimes involving the military base servicemen were recorded in Gyumri: On January 12, 2015 Valery Permyakov shot seven family members, including two small children — a two-year girl and his brother, who died a week later in the hospital. On June 15 in Gyumri the 102nd Russian military base conscript servicemen, Ivan Novikov, was found dead. By preliminary data, one of the contract servicemen at the same military base was suspected to have committed the murder.