Russian MP, who asked Putin to denounce the Treaty with Turkey VIDEO

State Duma deputies, secretary of the Communist Party Sergey Obukhov, Deputy Chairman of the Central Committee of the Communist Party Valery Rashkin have appealed to President Vladimir Putin and Foreign Minister Sergey Lavrov with a proposal to denounce the Moscow Treaty of friendship and brotherhood, concluded by the Government of the Russian Soviet Federative Socialist Republic (RSFSR) and the Turkish authorities on March 16, 1921. 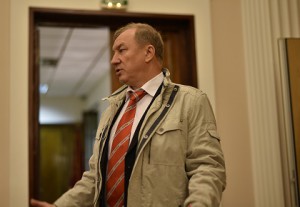 State Duma deputy, member of the Central Committee of the Communist Party Valery Rashkin in his exclusive interview to RUSARMINFO has told about the purpose of their appeal, and that the Foreign Ministry has already assessed the proposal as a realistic and balanced, and in the near future the foreign office will develop an official position of Russia. Armenia should participate in the process of cancellation of the Moscow Treaty, as well as in the further distribution of those territories passed to Turkey after signing the Treaty, — says Valery Rashkin. Valery Rashkin — State Duma deputy, member of Central Committee of the Communist Party We’ve sent a letter to the President and Minister of Foreign Affairs based on the fact that the policy, which is now conducting Erdogan as President of Turkey, together with his team, is not acceptable to us. The double standards, which simply stick out of his speeches, official statements and positions, not only annoy us, but we are already dismayed by them. There is that treaty signed in March of 1921. Yes, it was Russia to sign it, but at that time the Soviet government was weak, and we needed peace. So, we agreed on the fact that the three regions became part of Turkey. But I myself believe that this doesn’t mean forever. After the World War II, Stalin raised the question to revise the Treaty. His death interrupted the solution to this issue, and then it was not considered. I think that it’s time to sober Erdogan with his policy of double standards. We must firmly put the issue of the termination of this Treaty. We need to sit down at the negotiating table and see how it is possible to settle the world, assuring that other countries are satisfied as well. This concerns both Armenia and Georgia. Listen, Ararat had always been in Armenia. Ararat is a holy mountain. Why is it in Turkey and for what reason has this issue not been raised? Let’s discuss at it with the participation of Russia and Turkey, and other international actors. That is why we have appealed to President Putin and the Russian Foreign Ministry. The Ministry of Foreign Affairs has responded by saying that it’s a serious question but a balanced and real proposal. And they will share their opinion on the proposal.