Opinion: «Russia will denounce the Treaty of Moscow, if Turkey sends troops to Syria» 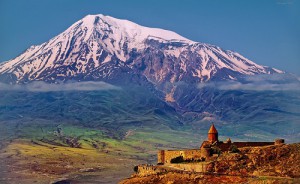 State Duma MPs, Communist Party secretary Sergey Obukhov and Deputy Chairman of the Central Committee of the Communist Party Valery Rashkin have appealed to President Vladimir Putin and Foreign Minister Sergey Lavrov with a proposal to denounce the Moscow Treaty of friendship and brotherhood, concluded by the Government of the Russian Soviet Federative Socialist Republic (RSFSR) and the Turkish authorities on March 16, 1921. “With the rise of Turkish aggression, we should consider the possibility of legal review of all the Russian-Turkish agreements that are unfavorable for our country and its allies. Ankara should understand what the conflict escalation can turn to her. Only this can sober up and keep it from further provocations,” announced said Sergey Obukhov.

The initiative is also supported by the colleagues from the “Spravidlivaya Rossia” (“A Just Russia”) political party, who introduced to the State Duma a bill on the Armenian Genocide in the Ottoman Empire at the end of last year, reports “Izvestia”, referring to the representatives of the Communist Party. Such an initiative is dictated by the actual relationships between Russia and Turkey, the actions of which cast doubt on the need for a treaty of friendship, — says Boris Dolgov, senior researcher at the Center for Arab and Islamic Studies of the Institute of Oriental Studies, the Russian Academy of Sciences.

“This initiative is absolutely justified and shows the mood of Russian society and parliamentarians. It’s difficult to say how the higher Russian leadership will react to this proposal, but it is clear that part of the Russian leadership, especially the security forces support the abolition of the Treaty of Moscow,” told RUSARMINFO Boris Dolgov. According to the expert, if the confrontation between Turkey and Russia worsens, the cancellation of the Treaty of Moscow will be more than real. “Given the message of the Defense Ministry of Russia over Turkey’s intention to send troops to Syria, the Russian-Turkish relations are unlikely to improve. And if Ankara really brings troops to Syria or begins a ground operation in Syria as part of any coalition, then Moscow will definitely void the Treaty of Moscow,” concluded the orientalist. For the first time the question of denunciation of the Treaty signed with Turkey in the first quarter of the XXth century was raised in 1945 by Stalin, but the initiative was rejected by the West. As a result of aggravation of the Russian-Turkish relations after the incident with the Russian bomber Su-24, the issue of the Treaty denunciation has been again raised in Russia.